Geordie’s nightmare – a sheepish (and sleepless) night at Broadstruther

This tale dates from a time when Broadstruther farm was semi-ruinous and the adjacent byre was used as a hay store – although lots of walkers used the location as a bad weather shelter or an overnight bothy when heading to/from the SYHA sites at Kirk Yetholm or Ferniehirst Castle in Scotland, or the YHA hostels at Wholehope Cottage or Alnham in Coquetdale. It seems likely that these 20th century folk were carrying on a tradition dating back many years, because Broadstruther farm is on a drove road that went south via Langleeford, then over the hill down to Threestoneburn and onwards to the cattle market in Morpeth and the drovers likely used the fields and byre as ‘lairage’.

My wee story is set in 1957 and began with a Friday night bus trip from Newcastle Haymarket up to Wooler. My companion was George S, a North Shields lad and a fellow employee at Reyrolle and Co, where he was a draughtsman wearing a suit and paid a monthly salary and I was a lowly apprentice toolmaker wearing a brown warehouse coat and getting a pay packet every Friday.  Sartorial and pecuniary matters aside, we were both keen walkers, YHA supporters and members of the newly formed Northumbrian Ski Club and our differences evaporated as the factory siren set us free for the weekend.

Our flexible plan was to walk via Wooler Common up to Broadstruther to doss there overnight amongst the hay bales, then start early for a walk over to Wholehope via the side of Cheviot to Scotsman’s Knowe, then Lintlands hill to Bloodybush Edge and over to Clennel Street and so down to the rendezvous at Wholehope.  This was in mid-summer, so the long hours of daylight would allow a diversion to Davidson’s Linn and some skinny dipping in the pool below the waterfall..

A pleasant stroll brought us to Broadstruther at dusk, where we made an evening meal and sat outside for a while chatting – but the weather was changing and raindrops started to fall as we moved inside for the night, carefully lifting the rotting door into place (the bottom corner of the door had completely gone) before getting into our sleeping bags.

Nodding off to sleep, I was dimly aware of the wind increasing and heavy rain battering on the door, but in those days I slept like a child so I was soon fast asleep.

Unbeknownst to us, in the dim dark hour before dawn the bravest of the local ‘hefted’ ewes (see footnote) crept into the byre via the hole in the door and lay down on the hay bales close to where George lay.  George was a nervous chap and a restless sleeper, and in his dreams he sleepily became aware that something was beside him and switched his flashlight on – straight into the reflective eyes and horrible brown teeth of the ewe, at which the creature panicked and began bounding around looking for the exit.

His nightmare suddenly real, George screamed that we were under attack and began leaping about like a big green caterpillar (he couldn’t get out of his sleeping bag),  then dropped his torch so that the light went out.

Also zipped into a sleeping bag, I had no idea what was happening and I thought that George had finally flipped, so I rolled off the bales into a corner and hid until he stopped screaming and found his torch.  When the dim light came on again I was down behind the bales and out of sight, George then got fully out of his sleeping bag and ran outside looking for me!

Further sleep impossible, we packed our gear and set off in the general direction of Scotsman’s Knowe, there to make a brew and to watch the clouds disperse as another beautiful Cheviot day dawned.

In the 61 years since the events described, Broadstruther has been rebuilt as shown below.  Les Hull’s photo shows the refurbished house and byre, now used as a lunch place for shooting parties on the adjacent moors.  The building may be renewed, but memories are written into the ancient stones. 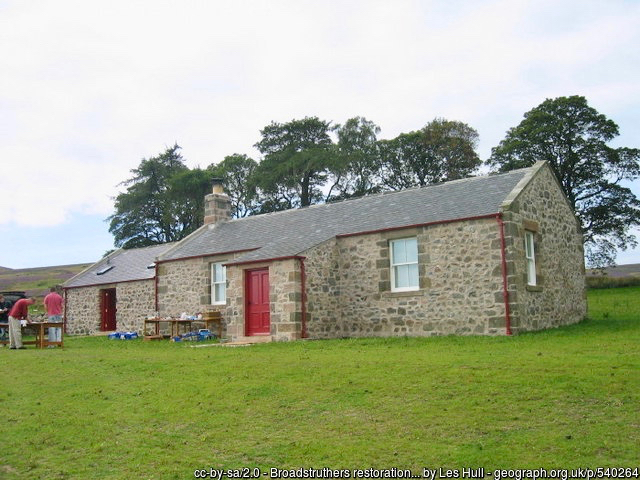 Wandering the green and lonely Cheviots back in the 1950’s, we took the amenity value of the hills (and the presence of the hill shepherds and their families) for granted, foolishly imagining that the animal husbandry and forestry practices that had produced the mesmerising landscapes would continue ad infinitum and that our grandchildren would enjoy the same freedom to roam.  Bitter reality has proven that we were wrong on both counts!

Sixty years of changing agricultural policy and the after effects of the Foot and Mouth plague have produced an economic reality that has depopulated the hills and encouraged the development of monoculture forestry plantations.

Now, Mammon reigns supreme and imagination is required to visualise the same green and beautiful vistas with lots more sheep (and shepherds!) but very few trees and in particular no massed and sterile sitka plantations and no logging roads or awful ‘clearfell’ moonscapes.

In those days, many hill sheep were ‘hefted’ to their home pasture. They did not roam free even on unfenced land, because each animal had its “home” territory.  When hefted sheep were brought down for dipping, lambing or shearing, on release they would return to their “home” territories.

This site uses Akismet to reduce spam. Learn how your comment data is processed.