Blame global warming if you like, but the hard crisp winters of happy memory are just that – memories. The pattern in more recent times has been for a dump of snow and sub-zero temperatures around the end of November (we all think ‘this is it’!), then a return to higher temperature levels and constant rainfall. Of course, the occasional good days that do happen occur when we are working or otherwise tied up and it would take Einstein to calculate the odds against the combination of brilliant blue sky + good snow cover + low wind speed + it’s the weekend + I have the time off.

That said, at least once each winter the ‘Golden Equation’ happens and it behoves us all to get our metaphorical skates on and hit the hills. A few years ago, the first great day for us was January 13. The hills were white, with a good dusting of snow at the higher elevations, and the weather forecast was for continuing high pressure, moderate wind speeds and zero precipitation. We had only a few hours to get out, so we discussed doing something local and agreed on a walk up Ben Lawers, bypassing most of the ‘tourist route’ by using the old slate quarry road that goes up and over the bealach between Beinn Ghlas and Meall Corranaich, passing the site of the old Ski Hut and making a right turn off the road before the bealach summit. 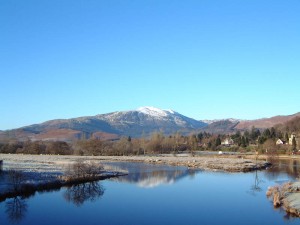 Through Callander, and with Ben Ledi gleaming with a dusting of new snow, the sun was shining with the promise of a great day ahead. 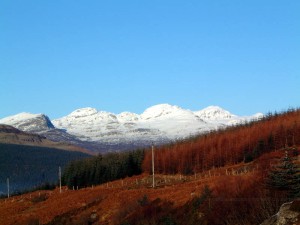 Nearing Killin, the sight of the Tarmachans ridge covered in snow helped to lift the spirits even further, so after parking the car at the Ben Lawers visitor centre (since demolished) we fairly romped over the duckboards and away up the track. Walking this old track, it’s worth remembering that this area supported quite a seasonal population in bygone times. Recent archaeological investigation has indicated the existence of an ancient hunting camp near the summit of the bealach, and the track weaves around and through the remains of shielings and rough huts from when these hillsides were covered with grazing cattle and children, who lived up on the hill for months at a time. There was some early industry here too, local historical opinion in Killin maintains that some of the oldest slated buildings in the area are roofed by slate extracted from these hillsides, although the exact location of the slate quarry is unknown. Nowadays, visitors tend to be clad in hill gear and mainly keep to the right-hand fork of the track, to make a direct approach to Beinn Ghlas.

At the path junction, we took the old road up to the left, above the Burn of Edramucky and past the site of the old Scottish Ski Club Hut at the foot of Coire Odhar.

As a wee aside, in the ’90’s we had a key to the hut and spent some memorable nights there, including one visit with the ‘Stovies’ Club, when we were impressed by the speed at which Dougie Dewar could move when someone spilled boiling water on the floor next to his sleeping form. Sadly, the hut is no more, with final demolition and funeral pyre back in 1999, but in happier times, the place served as a an occasional training base for the Killin MRT and even starred in one of Nick Nairn’s cookery programmes, with the Luti twins from Callander cast as star players.

Back in the 1930’s, the hut was a very significant element in the early days of skiing in Scotland and was used during WW II as a base point for mountain warfare training for Commandos and Free Norwegian troops (see the editor’s note at the end of Memories of Norway for a link to the uses of the hut in wartime).

After the war, and as the Ski Club resumed using the hut, some of the earliest

experiments in mechanical uplift took place in Coire Odhar – the evidence being the odd blocks of concrete hidden in the heather, complete with rusting cables and attachments. The Club also used an ex-army tracked ‘Weasel’ vehicle to help skiers avoid the walk up from Loch Tay side. See a Weasel in action in this link

Meanwhile, looking across to Meall Corranaich, it was obvious that weather conditions were changing quite quickly, with increasing high-level temperatures producing a temperature inversion and filling the glens with mist, so that the mountains to the west and south stood out like islands in a silver sea, producing magical effects and optical illusions.

From our vantage point on Beinn Ghlas, we enjoyed views of Ben Vorlich and Stuc a’ Chroin and the Meall nan Tarmachan/Meall Garbh group –

while to the south, a glimpse of Loch Tay under the inversion made an interesting and unusual spectacle. The state of the snow improved as we climbed, and from halfway up the final slope conditions were ideal for crampons, so we enjoyed a smooth ascent up the edge of the crags and buttresses overlooking Roro Glen and Glen Lyon, pausing for photos of the munros Meall a’ Choire Leith and Meall Corranaich en route.

The panorama from near the top of Beinn Ghlas showed us the spindrift blowing from the tops,

with Ben Lawers in all its 1214 metre splendour, and with An Stuc and Meall Garbh glimpsed away on the northeast ridge. A quick run up and down the final slope, an even more rapid descent on a bearing for the top of the path and we were bound for a quick pint in the Rob Roy bar at The Kingshouse (now called ‘The Mhor 84″ at Balquhidder road end.

At least once each winter it happens – will you be ready?

This site uses Akismet to reduce spam. Learn how your comment data is processed.