Following the path over the fields from Thropton we arrive on the riverside path over from the Rothbury Golf Course, from 1759 until 1965 the location of the well known Rothbury Racecourse.  The next image (courtesy of Google Earth) shows the course in present times and the following map (courtesy of John Slusar) shows the ground when it was the venue for horse racing.

Continuing our walk along the riverside brings us into Rothbury, a place with a special place in my memory because I used to order coal and paraffin at the ironmongery shop, with transport to the Rose and Thistle in Alwinton where Geoff Foreman would  arrange a tractor up Clennel Street to Wholehope.

Anciently known as ‘Rodeberia’, the pretty little town was founded as a Crown manor after the Norman conquest and can justifiably claim to be the jewel in the crown of Coquetdale – were it not for a superabundance of parked cars.  Despite a free car park on the south side of the river, the town is completely clogged with cars  on busy weekends and the enjoyment

‘The Thrum’ strid, where the Coquet runs through a cleft in the rocks below the restored ‘Thrum Mill’ (now a private residence).  A ‘strid’ is defined as a narrow passage between precipitous rocks or banks, which looks as if it might be crossed at a stride.  Following fatalities, The Thrum was artificially widened to dissuade people from attempting to jump the gap. 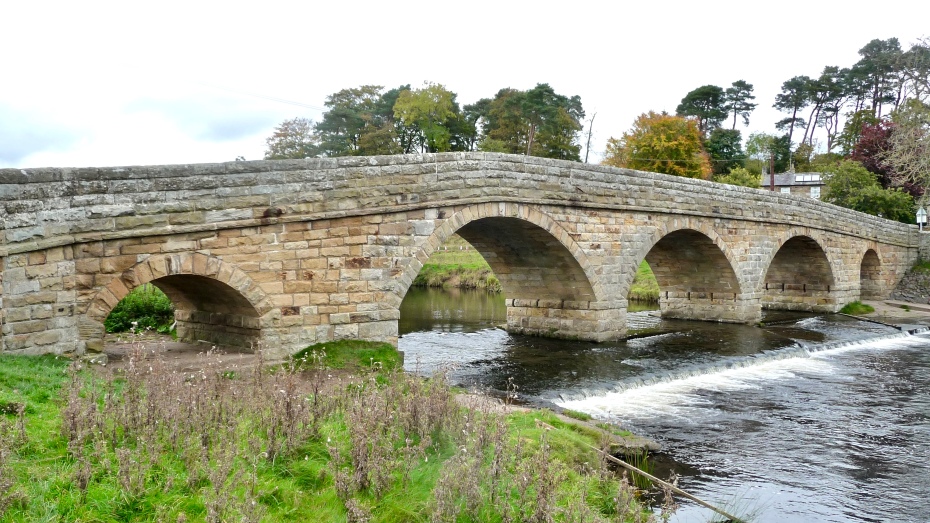 Built by the Duke of Northumberland and adopted by the county in 1888, the elegant five arch bridge at Pauperhaugh (pronounced ‘popperhoff’) is one of the most attractive on the river. The Coquet is prone to flash floods and the outer arches are spate arches to cope with rapid rise after heavy rain. Come on a stormy day in October or November to see salmon skeetering across the bridge apron. 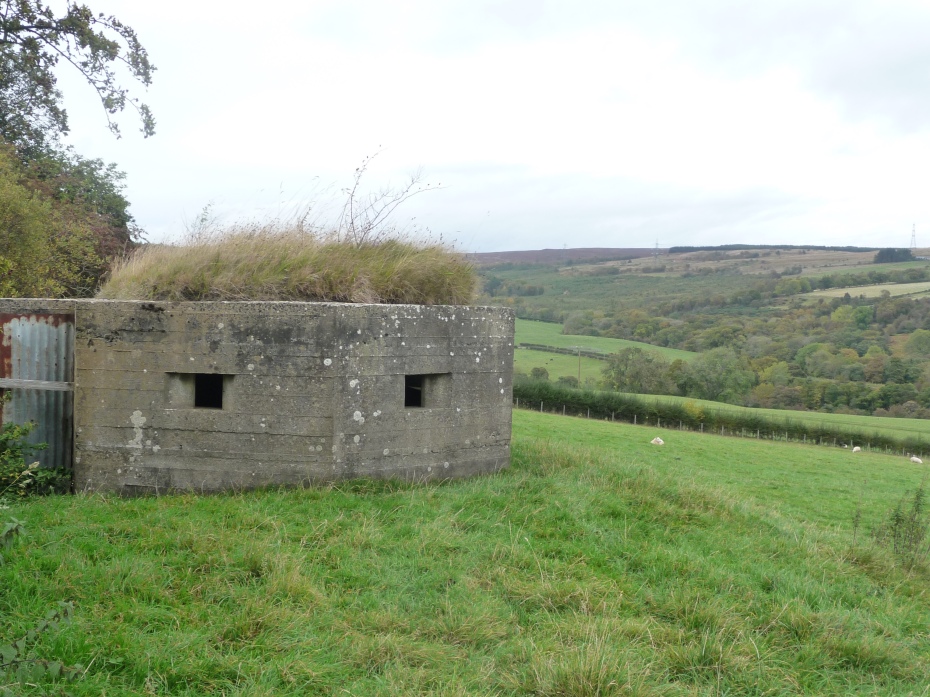 Near Pauperhaugh Bridge is this lozenge-shaped ‘Coquet Pattern’ pillbox, another WWII relic of the COQUET STOP LINE

About four miles downstream from Rothbury the Coquet loops around Brinkburn Priory.  Fully restored in the 19th century,  little survives of the original medieval buildings apart from the Grade 1 listed Priory Church.  Now stark in appearance,  the church interior shows that it was once on a grand scale, the acoustics being much appreciated by the lone cornet player who performed during our recent visit.

The Priory was founded as an Augustinian priory by William Bertram during the reign of Henry 1, becoming independent in circa 1180 when construction  of the monastic church began. Little is known of the early history of the priory, although it is known that it survived some difficult times.

Following dissolution in 1536, ownership passed to the Fenwick family who built a Manor House nearby.

The church was maintained in a fair state of repair until in 1602 it was reported to be in a state of decay, then before 1700 the roof collapsed and services were abandoned.

By the 19th century the Cadogan family owned the estate and revived plans for the restoration of the church, this major work was consecrated in 1868.

The Devil’s Causeway Roman road from Hadrian’s Wall to Berwick crosses the Coquet near the Priory, just one of the many ancient tracks that crisscross what was once wild country harbouring thieves and brigands.

A brooding riverside scene at Brinkburn.

Downstream from Brinkburn, Coquetdale gradually opens out and vistas expand as  the banks become less steep and the river takes a more serpentine form and it is hard to envisage the green and peaceful valley as a centre for coal extraction, but this table lists the victorian era collieries and drift mines within a few miles radius.

(Table adapted from material on the Durham Mining Museum website)

Path above the river near Felton

Further downstream is this wartime reminder of desperate times.  Originally a WWII RAF establishment, Eshott (aka Bockenfield) is now an active civil airfield with both tarmac and grass runways.

Opened in 1942, Eshott was built as a training airfield, with three runways in the typical ‘A’ layout and a perimeter track linking the runways.  Operational Training Unit 57 was the only resident, arriving when the airfield opened and disbanding when the war ended.  This was an extremely busy airfield with around 100 Spitfire aircraft and eventually had to expand by forming a satellite at RAF Boulmer.

There is much more to Felton than the excellent ‘Running Fox’ artisan Bakery and Cakery.  For example, the next pic shows the exterior of ‘St Michael and All Angels’ church, given by William Bertram (grandson of William Bertram I founder of Brinkburn Priory) to Felton in CE 1199. The church has a beautiful and well kept interior and consists of a chancel and nave with north and south aisles and a south porch. Aisles were added in the fourteenth century.

Look for this window in the eastern end of the south aisle, inserted circa CE 1331. The construction is very unusual because it is worked in a single 6 foot 6 inches by 4 foot stone, possibly brought here from Brinkburn.

The old stone bridge at Felton. This bridge was apparently built in the 15th or 16th century and is still in excellent condition. In contrast, the ‘modern’ bridge already has a badly rusted handrail that urgently requires replacement. 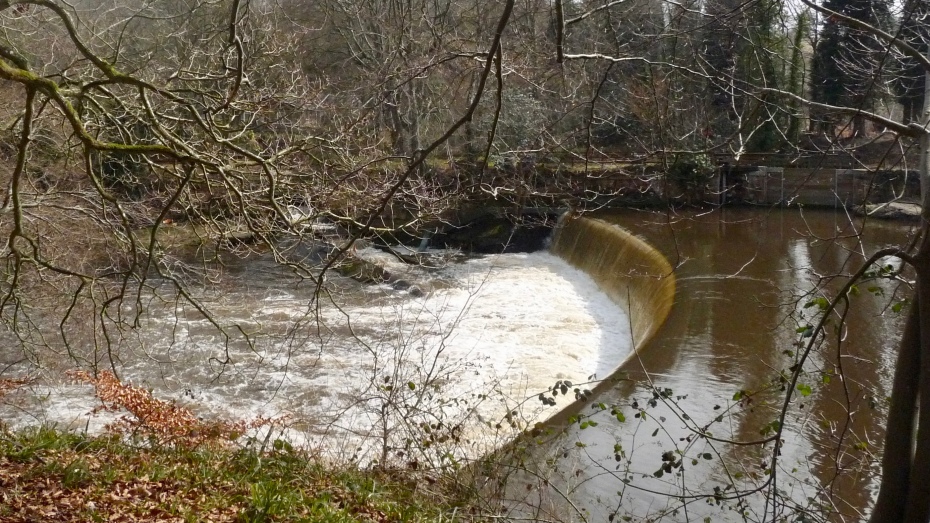 The 1776 dam constructed to power the Acklington works is considered to be one of the finest in England and is the site of a WWII tragedy, where ten trainee soldiers were drowned during a river-crossing exercise that went wrong when their boats went over the top of the dam in spate conditions.  The next photo shows the well-kept memorial to these poor lads. 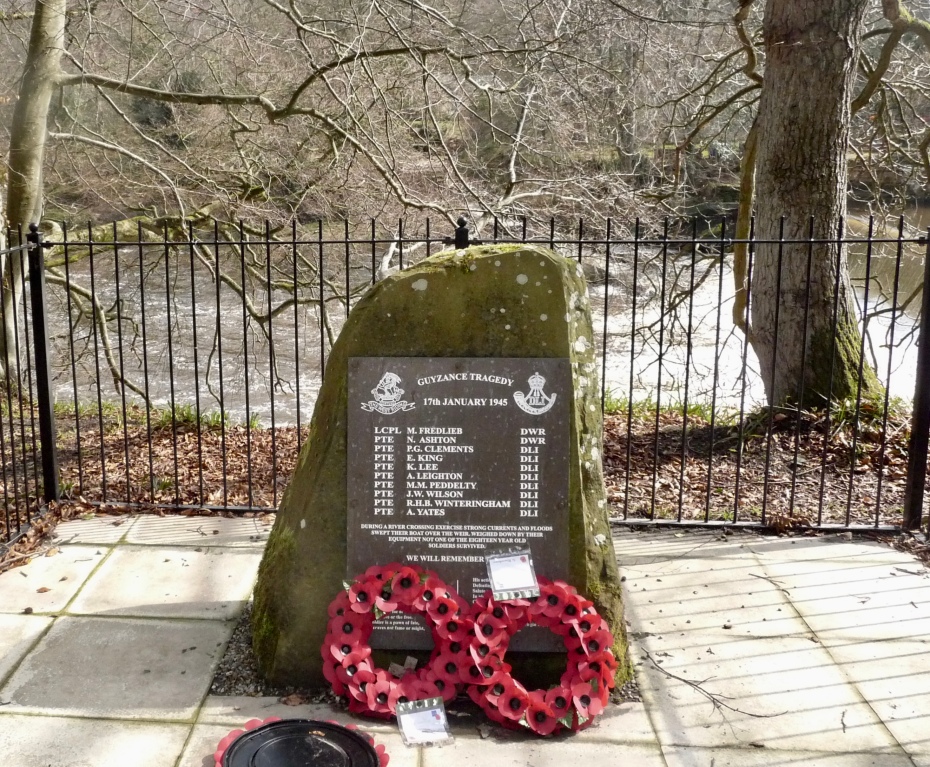 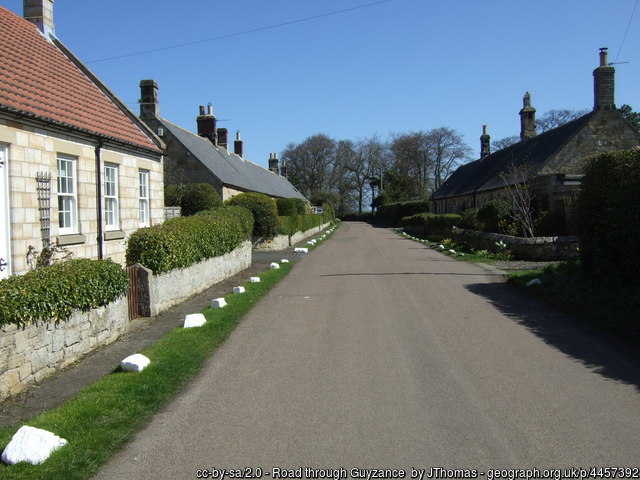 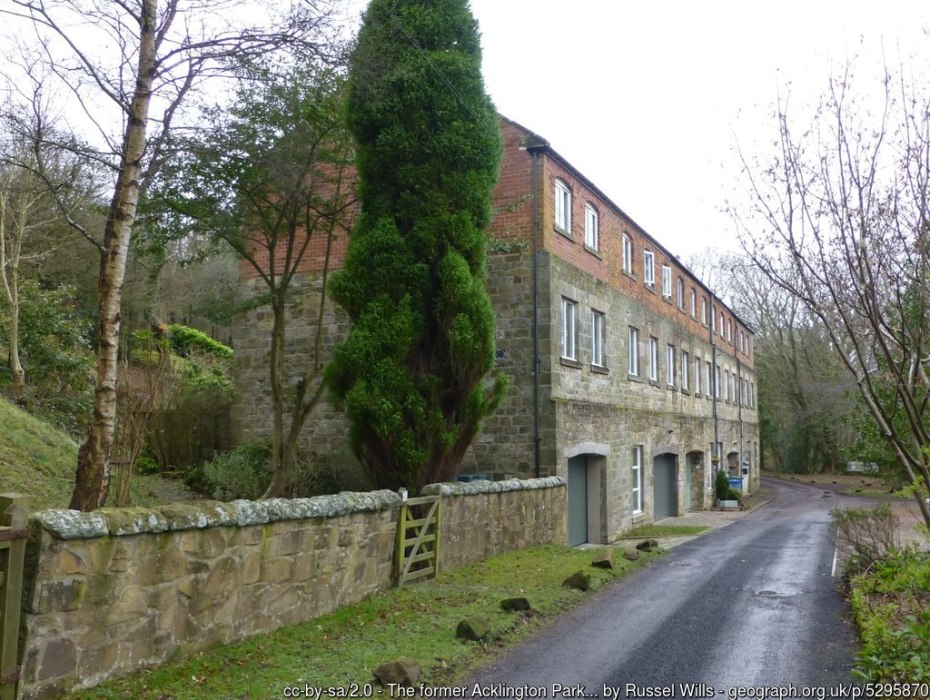 This was originally the Acklington Park Ironworks, subsequently used as a cloth mill and paint factory and now converted as private housing (photo by Russel Wills). 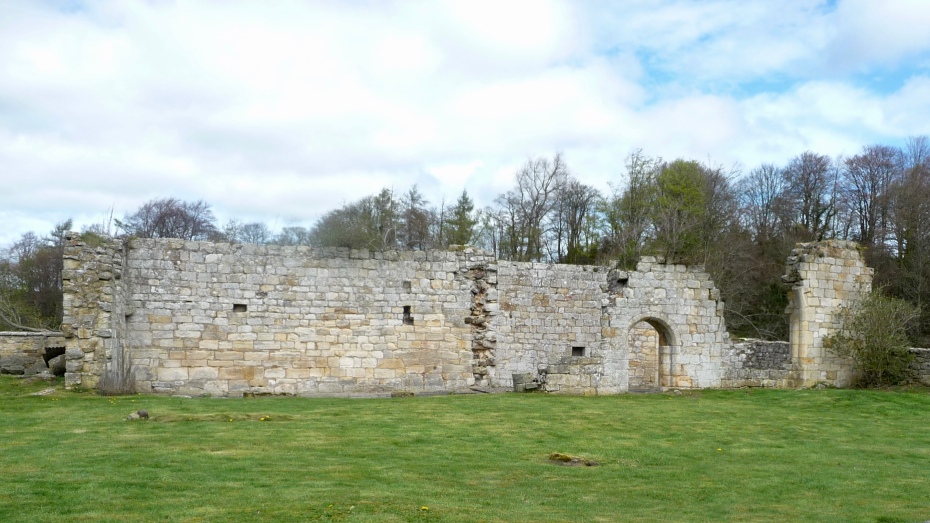 The remains of the twelfth century Brainshaugh Priory are in a loop of the Coquet at Guyzance. Constructed by Richard Tison for the benefit of nuns from an Alnwick religious community, the chapel fell into disuse during the eighteenth  century, although burials took place until the nineteenth century.  The grounds were used as a private burial place for the Milburne family.

Further downstream and past the waterworks, these well worn steps lead up to a quaint oratory known locally as the ‘Warkworth Hermitage’.  Probably constructed in the middle years of the 14th century, the original rock-hewn rooms were later supplemented by stone built exterior accommodation (now ruinous) possibly to house a ‘chantry priest’ – the incumbent of a ‘chantry’ endowment to pray for the soul of a departed person.

The balladic story behind the construction of the Hermitage is tragic and romantic (and very likely apocryphal!) and concerns Sir Bertram of Bothal Castle.  Heavily edited, my version of the tale reads like this:

‘Urged on by his lady love Isabella, the bold Sir Bertram went raiding into Scotland and was wounded in a skirmish.  Isabella rushed north to be with Bertram, but was kidnapped by a Scottish admirer.  In rescue mode, Sir Bertram and Isabella’s brother set off in ‘hot trod’ pursuit but agreed to separate in order to cover the ground more effectively.

Bertram discovered Isabella’s location and was covertly watching the place when he saw her descending a rope ladder aided by a youth wearing Scottish clothing.

Rushing forward, Bertram attacked the youth and killed him, accidentally killing Isabella in the fray. The youth was Isabella’s brother.  Bertram’s penance was to build the hermitage and to spend the rest of his life in mourning.’

Warkworth Castle seen from the riverside path while the daffodils were in bloom.

Weir across the Coquet just upstream from the riverside car park at Warkworth.

Downstream is Amble, from 1838 to the 1960s an important port for the shipment of coal from adjacent collieries.  Radcliffe pit in Hauxley was operational from the early nineteenth century until flooding in 1892.  Togston pit opened a few years later and Newburgh pit opened in 1900 very close to the original pit at Radcliffe but was flooded out in 1926. All assets, including pits, railways and coal staithes and Amble harbour itself were amalgamated and renamed Broomhill Collieries.  The last coal ship left the harbour and the staithes were demolished in the late 1960s.

Subsequent open-cast mining brought some new employment and most of the land has now been returned to agriculture, with some transformed into Hauxley Nature Reserve.

We’re getting very close to the end of our journey together down the Coquet, this wonderful river so steeped in the history of Northumberland and Mark Hume’s photos of the sunrise at Hauxley and the undersea sandstone reef that leads the eye out to Coquet Island are the last images in this story. 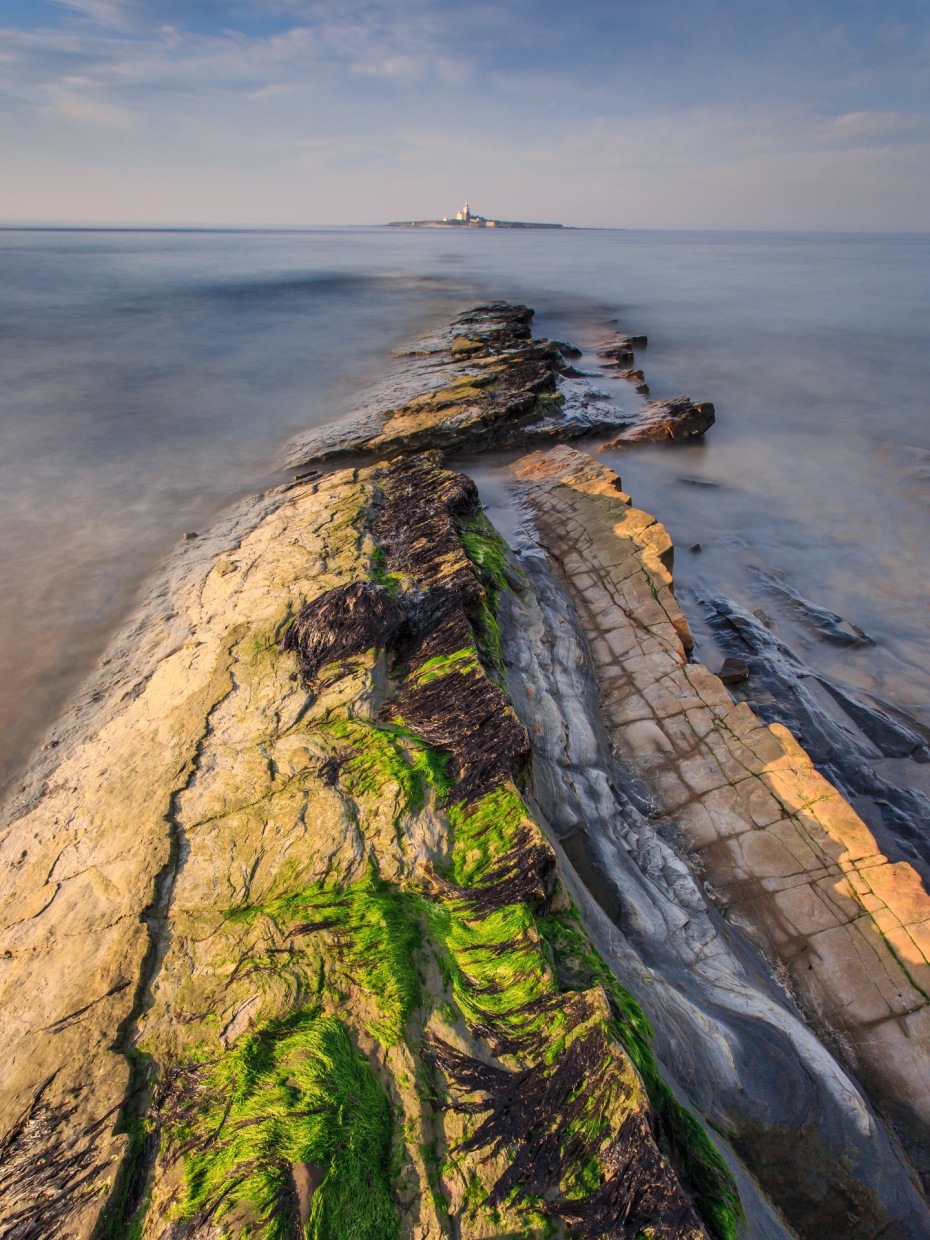 Map extracts are courtesy of Ordnance Survey on behalf of HMSO. © Crown Copyright.  All rights reserved.

1) Road Guide to Northumberland and The Border – Robert Hugill 1931

I use my own photos wherever I can, otherwise I use ‘Creative Commons’ images from geograph.org. Thanks to Andrew Curtis, Paul Franks, J Thomas and Russell Wills for ‘Creative Commons’ permission to use their images.  Thanks also to Mark Hume and Jimmy Morse for their pics and to John Slusar at GREY HOUND DERBY for the map of Rothbury Racecourse.

If you can help with photos, information or factual corrections to improve this article, or if I have inadvertently ignored your copyright, then please click here to email me.